Following up on my vegan sources of iron article, I’ve decided to publish this vegan sources of protein article. The idea actually came after a couple of friends shared cartoons and a funny story regarding the protein thing. “The protein thing,” by the way, is the absurdly common question people ask vegans and vegetarians: “but where do you get your protein?” The question is baffling to a lifelong vegetarian like myself, as well as almost any informed vegan or vegetarian — there are so many vegan/vegetarian sources of protein! Furthermore, it’s an odd question because a large number of Americans have health problems from eating too much protein (and early death).

Also, it’s worth noting that some of the world’s top athletes have raised the bar of athleticism while on vegan diets. One prime example (from many) is Carl Lewis, Olympic Athlete of the Century and 10-time Olympic medalist (9 golds and 1 silver).

Anyway, I will show below comparisons of per-serving and per-100g amounts of protein for some vegan foods as well as beef. But, first, here are two cartoons related to protein and veganism (1st via Katalin Sagi and 2nd via Gavin Hudson): 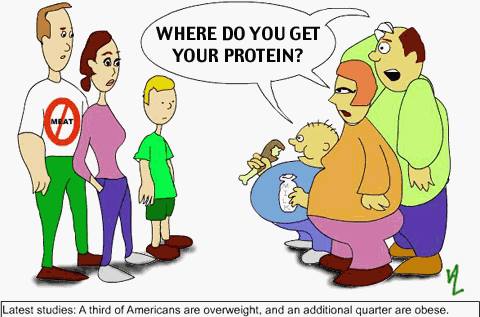 One more graphic before I get to the numbers is one I just found via one of the links above:

On to the comparison table…

Not so hard. Pretty much what we do naturally without even thinking about protein needs.