The Cerro Dominador solar-thermal mega-project being developed in the Atacama Desert in Chile just took a big step forward after obtaining a favorable environmental rating from Chilean Environmental Service authorities. The Cerro Dominador project will be the first solar-thermal power plant for direct electricity production in the whole of South America — as well as, […]

Originally published on Cost of Solar.

Where does the energy we need, animals need, and plants need come from? Largely, it just comes from the sun. Plants use solar energy to grow and develop, and animals and humans then get that energy from plants. It’s an amazing thing that we generally don’t give much thought to.

Interestingly, a similar thing we don’t give much attention to is that the fuel we use to create electricity and to power our vehicles also essentially comes from the same source. Fossilized remains of plants and animals are burnt in order to create our electricity and move our cars and planes forward.

Does all this get you thinking? It certainly got me thinking….

When it comes to energy, the bottom line is, solar energy is the motherload. The sun is the mother of our gigantic energy supplies. Many people who have reflected on this have seen that solar energy is the most promising source of energy in the long term (and, increasingly, in the medium and short term). As a 1931 quotation from Thomas Edison on the bottom of this website states, “I’d put my money on the sun and solar energy. What a source of power! I hope we don’t have to wait until oil and coal run out before we tackle that.”

Unfortunately for Mr. Edison, we have probably waited quite a bit too long. But at least we are getting to it now! 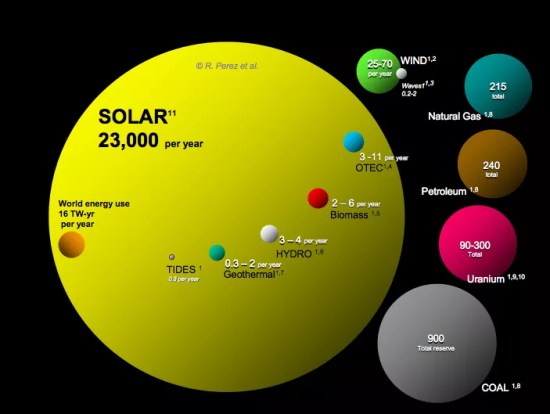 So, the question is, what have we been waiting for? Well, we had to develop a technology that could efficiently and cost-effectively capture that solar energy and turn it into electricity. Luckily, we’ve now been able to develop such technology, and solar panels are so ridiculously cheap now (after years of rapid cost drops) that the average American who goes solar now saves over $20,000 over 20 years from doing so.

Perhaps it’s time to do the obvious and put your money on solar energy… just as Thomas Edison would have done if he were alive today. At the very least, get a quote in order to see how much you could save by going solar today.

US Energy Secretary Ernest Moniz this week announced $30 million of support for 12 more unique, hybrid solar projects through the ARPA-E program. Actually, it’s through a program within that program – the Full-Spectrum Optimized Conversion and Utilization of Sunlight (FOCUS) program, “which is aimed at developing new hybrid solar energy converters and hybrid energy storage systems that […]

You are probably familiar with concentrating solar power (CSP), but a new type of CSP plant, a molten salt CSP plant, has just gotten rolling and you may not yet know why that is important. Read the rest of this…