Editor’s Note: Aside from the notes in the article below, a few other interesting things jumped out to me. 1) Despite going bankrupt and being delisted from the NYSE, Suntech managed to still make it into the top 15 in 2013! That’s somewhat impressive. 2) The only solar module supplier in the top 10 not

Top 15 Solar Module Suppliers Of 2013, Via IHS was originally published on CleanTechnica.

En route to its 2050 Energiewende goal of 80% of the nation’s power being supplied by renewables, especially spurred on by the phaseout of nuclear reactors, Germany broke another renewable energy record on Sunday, May 11, 2014. Europe’s biggest clean-energy market reached almost 75% renewable power market share noon on that day. As the Disruptive Renewables chart

Germany Reached Nearly 75% Renewable Power Use On Sunday was originally published on CleanTechnica.

The top 15 solar PV module manufacturers of 2013 have been revealed thanks to a new report from the market research firm IHS.

As many would no doubt guess, the list is dominated — yet again — by firms based in China. But, interestingly, the Japanese firms Sharp and Kyocera saw a bit of a resurgence — up a fair bit from previous years. Japan’s strong feed-in tariffs for solar and Japanese preference for Japan-made products was clearly part of this upswing.

Some other things to note — Yingli Green Energy (aka Yingli Solar) once again took the top spot; 7 out of the top 10 companies were based in China; and the total Chinese share of the market fell 1% to 58% — down from a 59% market share in 2012.

“The year 2013 marked the turnaround of global PV markets and the recovery of leading players in the photovoltaic industry,” stated Jessica Jin, an analyst for solar supply chains at IHS. “Chinese and Japanese PV module suppliers benefited from the surge in demand in their domestic markets, with China in particular accounting for more than a quarter of global installations in 2013 and becoming the leading region in the process.”

The Chinese as a group continued to be the star players of the global PV market, but there were also signs pointing to slower growth. While they continue to lead by far, 2013 also marks the second time their overall market share has not risen significantly. Chinese suppliers held a 57% share in 2011, 59% in 2012 and 58% last year.

While Sharp and Kyocera saw the most substantial rises, a third Japanese firm managed to rank in the top 15 as well, CIS thin-film producer Solar Frontier. Solar Frontier saw shipment growth of more than 60% in 2013.

The IHS report also noted that total global solar PV shipments hit 38.7 GW in 2013 — roughly a 24% increase over the previous year. Interestingly, much of the growth appeared to be from the top players — showing clearly the consolidation of the industry. The top 15 manufacturers held a 59% market share in 2013, up from 51% in 2012.

With regard to the continued consolidation of the solar PV manufacturing industry, that’s something that’s likely going to continue for some time — with the dropping of state-support, in many cases, being one of the main drivers.

That’s exactly what’s happening right now in China, with a recent order by the Chinese Ministry of Industry and Information Technology doing a lot to “clean up” the industry — likely finishing off over 75% of the country’s solar panel and related component manufacturers.

Expect to see more of that in the near-future. And just note, this isn’t bad — it’s a natural part of a maturing industry.

A representative of Soligent recently passed along an interesting note regarding a US movement away from solar PPAs and leases. Basically, as solar costs have dropped and banks have warmed up to solar, it has become more and more attractive for homeowners to go solar with cash or a bank loan. That trend is expected to continue. In the following Soligent graph of a home in California, you can see how different options turn out for customers over the course of several years. 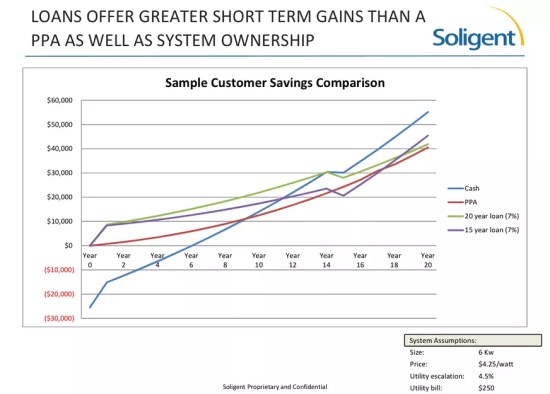 I’ve previously looked at solar leasing/PPAs vs financing a solar system via a loan vs buying outright with cash and have found a split between leasing/PPAs and getting a loan (buying outright is always better in the long term, but that’s without considering opportunity cost). However, that was just a look at 10 houses in 10 different cities. Furthermore, it was a snapshot, rather than a look at prevailing trends.

Along the same lines as Soligent’s point above, analyst Travis Hoium on Motley Fool recently noted that SolarCity seems to be seeing a bigger % of its business coming from sales despite preferring to do leases.

I think cash or loan sales will become ever more common in the future, particularly as costs fall. If a consumer buys a system, he can keep the tax benefits as well as all of the cost savings from going solar. As solar loans become more prevalent, we’ll see rates fall to somewhere near SolarCity’s securitization deal, meaning homeowners will be able to take advantage of solar financing without giving ownership out to someone else.

I also think we’ll see installers compete on cost of installation as the number of installers grow, which will cut margins. It’s far easier to compare two cash offers from installers than a 20-year lease to a fixed cost to install a system, which may be the case today. Since SolarCity has better infrastructure in financing, it can offer better rates on leases, expanding margins, but won’t have the same advantage competing for cash sales.

No disagreement here, which is one reason why I’ve bought stock in SunPower but not SolarCity. Specifically regarding that topic, Travis writes:

That’s why I see SunPower, which makes the industry’s most efficient panels and sells through partners, and RGS Energy, which offers a suite of sale options, as better values in the current marketplace. With a $6 billion valuation, SolarCity is priced as if it will generate $2 in value from installations for years to come, but I think that number will fall, particularly as cash sales increase.

If the shift away from leases does happen, SunPower and RGS Energy will be better able to compete and offer more upside for investors with $4 billion and $200 million market caps, respectively.

SunPower is already profitable, RGS Energy expects to be EBITDA positive in Q4, and SolarCity is still losing money quarter after quarter and can’t generate positive margins on cash sales today. You’d have to assume leases continue to grow and margins remain high to think SolarCity is a value today and that’s not the way I think the market is headed.

To back up this one analysts thoughts and words on a potential shift away from solar leasing & PPAs, here’s a recent graph from GTM Research on the flattening out of these options as a percentage of all residential solar installations over the past few years: 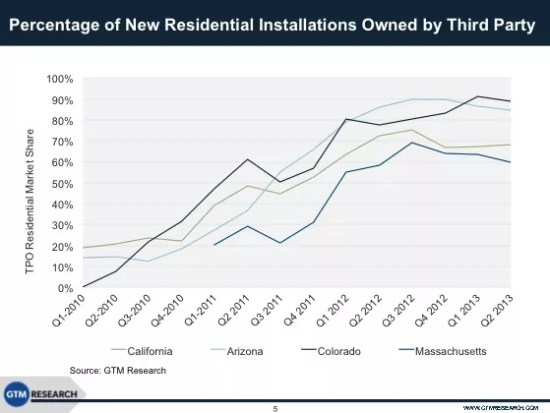 Interesting stuff. But third-party solar is still clearly dominant. We’ll be keeping an eye on these things in the months and years to come.

There’s no other way to say it — the Nissan Leaf crushed the competition in Denmark in April. It accounted for 68% of all electrified vehicle registrations. The Tesla Model S was a distant #2 with 12% of the market and the VW e-Up! was close behind it with 10% of the market. The remaining registrations can be counted […]

New research from the Centre for Economics and Business Research (Cebr) and RenewableUK has found what many had already deciphered, that the presence of wind farms has “no significant effect” on the price of houses within 5 kilometeres of wind turbines. Both based out of the United Kingdom, Cebr and RenewableUK have added further backing

Wind Farms Have No Sizable Impact On House Prices was originally published on CleanTechnica.

Originally Published on the ECOreport. A new Department of Energy map is a bit of an eye opener for those of us getting skeptical about the Golden State’s wind potential. According to an article in the Wallstreet Journal, wind power makes sense in Texas, but not in California, “which isn’t located in the ‘wind belt.’” That may be

DOE Map Helps Tell The Story Of US Wind Development was originally published on CleanTechnica.

New figured published by the UK Department of Energy and Climate Change (DECC) have shown that renewable energy is becoming more and more a player in the wider scope of national energy production, with wind energy generation up 40% and coal and gas production and generation both decreasing over the 2013 period when compared to 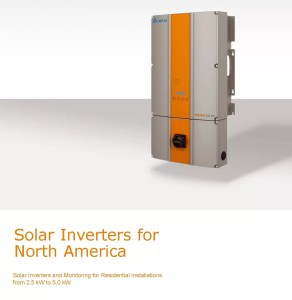 2. Module inverter/micro-inverter: This is also a module-level power converter. It takes DC input from the solar module and converts it into AC electricity, which is then ready to be connected to the load or single-phase main grid or to a central inverter. It is also equipped with MPPT technology to detect the maximum power point of each module. Even though it doesn’t requires any DC cabling, it is more expensive than the power optimizer due to its advanced design. The efficiency of such a power converter is about 96%. The important players in this power converter market are Enecsys and Enphase.

3. String inverter: As an extension of a module-level power converter is the string inverter, which is suitable for a string or parallel strings of modules connected in series. Such a power converter is used for small PV systems up to 10 kW in capacity and are usually connected to the main grid. The output of such a power converter is 3 phase lines which are ready to be connected to a low voltage main grid. Even though it is incorporated with MPPT technology, due to the connection of a large PV array, it has a global maximum power point (MPP) which then degrades the efficiency of the PV system. In order to improve the efficiency, it would be wise to use a module inverter first and then the string inverter. However such configurations are more expensive. Apparently, one of the cons in such power converters is that the PV system is highly affected by shadowing on PV modules, thereby pulling down the system efficiency as low as possible. Meanwhile, many researchers are investigating a new MPPT algorithm to get the most efficient global MPP to overcome the shadowing affect. Players include SMA, Power One, Fronius, and Delta Energy Systems.

4. Central inverter: In large PV power plants (10 kW and higher), central inverters are used instead of string inverters. However, the central inverters’ functionality remains the same (i.e, to produce a 3-phase high voltage output for grid integration), which is why this power converter is considered essential for connecting with the main grid. In many large PV power plants, central inverters are inevitable. But there are many losses within the PV system due to their large and complex configuration. However, to mitigate such losses, some of the manufacturers, like Siemens, have developed a master-slave arrangement, such that at low irradiance the system efficiency will increase.

This report from Solarpraxis AG allows a deeper dive into these solar PV technologies. In my next article, I’ll provide a comparative analysis of power optimizers and module inverters, focusing in more depth their pros and cons.

Types Of Power Converters In A PV System was originally published on Solar Love!.

2013 was a classic good news-bad news year for renewable energy with surging solar, green building, and EVs counterbalanced by slowing wind and investment

2013: Renewable Energy’s Best of Times, Worst of Times was originally published on CleanTechnica.