Cherry blossoms in the foreground of Mount Fuji (image: ladyadventurer.co.uk)

So far, at least, the famed blossoming cherry trees of Japan don’t discriminate geographically. This time of year, they grace even the surroundings of nuclear power generators shaken by earthquake, tsunami, and meltdowns three years ago. Otherwise, though, the Fukushima landscape remains desolate. Despite widespread resettlement in other regions, over 15 thousand residents of the proximate area still cannot return to their homes.

Cleanup contractors cannot perform customary work on the ground because the risk of radiation from the wrecked Fukushima Daiichi nuclear power complex continues. Instead, drones do the close surveillance. You can catch some of the video here.

The Tokyo-based multicopter firm HEXaMedia sends its unpiloted flying cameras over Japan’s eastern coast to record the destruction caused by the incredible tsunami that followed the 9.0 Tohoku earthquake and led Fukushima’s live reactors to melt down.

In this footage, one drone overflying the Japanese ghost town of Tokioma captures this year’s cherry trees, bright pink amid the abandoned and useless wreckage of local civilization.

“Tokioma had more than 15,800 residents across 6,000 houses, schools, and business, and all of them are still prevented from returning to their homes, pictured. A total of 300,000 people evacuated the Fukushima area on the east coast…. [As of August last year, 1,600 of these deaths were due to people living in temporary housing and not having access to hospitals or medical care.]”

Note: At least one of the YouTube posters (‪Shazzy Mazzy‬ of The News Insight) and Victoria Woollaston, the reporter who covered the drone tapes from the Daily Mail Online, appear skeptical about radiation dangers to life on earth: “many of these areas are said to be covered in radioactive soil,” “reports claim the soil and water in the region still contains high levels of radiation that makes the clean-up effort difficult.” This slanted “journalism” prompts unrealistic science denial. Tell it to the vapor and graves of Hiroshima and Nagasaki.

Drone Captures Fukushima Desolation Amid Cherry Blossoms was originally posted on: PlanetSave. To read more from Planetsave, join thousands of others and subscribe to our free RSS feed, follow us on Facebook (also free), follow us on Twitter, or just visit our homepage.

For this little Fukushima irony, many thanks to Fukushimaemergencywhatcanwedo.blogspot.com!

My good Twitter friend Alan Nogee recently shared an interesting graph with me. Frankly, we’ve probably written more about nuclear costs than is worth our time, so I’m not going to write a long piece here again. Here’s the graph (which I decided to title “nuclear premium”): 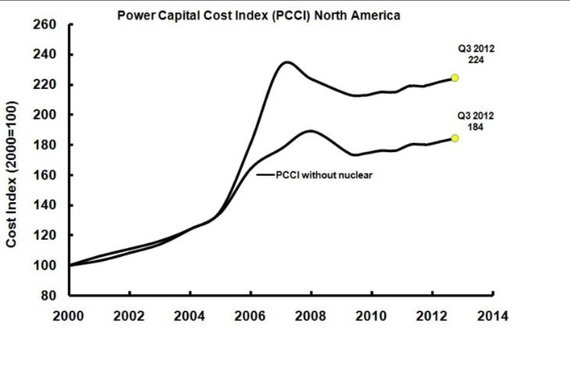 And here’s what market research company IHS had to say about it:

The IHS CERA Power Capital Costs Index (PCCI)
Leveraging the IHS CERA Index + Scenarios methodology, the PCCI tracks and forecasts the costs associated with the construction of a portfolio of 30 different power generation plants in North America. The PCCI tracks the costs of building coal, gas, wind and nuclear power plants, indexed to year 2000. The PCCI is a work product of the Capital Costs Analysis Forum for Power-North America, an annual renewable service managed by IHS CERA. For further information on the PCCI or the Forum, please contact Roger Kranenburg.

Scroll through our nuclear energy archives for even more. And subscribe to our cleantech newsletter to never miss a story.

1 Graph Says A Lot was originally published on CleanTechnica. To read more from CleanTechnica, join over 50,000 other subscribers: Google+ | Email | Facebook | RSS | Twitter.

A senior reactor operator employed at the Salem Nuclear Power Plant allegedly tested positive for cocaine after a random drug test. He was working as a control room supervisor. According to Career Zone, a person  working in this capacity, “Operate or control nuclear reactors. Move control rods, start and  stop equipment, monitor and adjust controls, and record data in logs.  Implement emergency procedures when needed. May respond to abnormalities,  determine cause, and recommend corrective action.” In other words, the individual runs the plant when it is online.

The employee, whose identity has not been revealed for the sake of privacy, has been suspended indefinitely. PSEG Nuclear followed procedure and reported the incident to the Nuclear Regulatory Commission. A spokesman from the NRC said, “It’s less material to us whether its cocaine, marijuana or alcohol.  It’s that they are impaired in any way and unable to perform their duties.” (Source: NJ.com) No impairment was observed in the suspended employees work. Cocaine usage has been documented to disrupt motor control and judgement. Salem Nuclear plant has two reactors and has been running at full capacity with no problems during the operator’s suspension. About 52,000 people live within a ten mile radius of the plant.

In 2012, 205 nuclear power plant employees tested positive for drugs or alcohol. Marijuana, alcohol and cocaine were the top three substances identified in those employees. Given the potential for human error and mechanical breakdowns in the nuclear industry, it seems very reasonable that nuclear plant employees are tested randomly and consistently for substances.

Occupations with the highest rates of substance abuse are construction, food service, entertainment and sales, according to an LA rehab center.

One of the most well known nuclear power plant accidents — Three Mile Island — resulted from operator error, but no employees were impaired by any substances in that incident. Incidents at nuclear plants in Alabama and Ohio were also related to operator error.

One of the many advantages of solar power plants is that operator error could not cause a radiation leak of any sort.  In theory, a solar plant operator could be impaired by a substance but still unable to do much damage to the public health, though he or she could
disrupt the production of electricity.

Though we try to keep a very positive focus here, PlanetSave isn’t just a blog about the wonders of the natural world and the glory of Mankind’s inventions. It also offers knowledge and a caution about our failures as individuals and as a species. We’ve all made mistakes before, big and small. By acknowledging anthropogenic [&hellip

Review: The Long Shadow Of Chernobyl was originally posted on: PlanetSave. To read more from Planetsave, join thousands of others and subscribe to our free RSS feed, follow us on Facebook (also free), follow us on Twitter, or just visit our homepage.

Obama’s 2011 State of the Union address (full text) is important to us all because it is not only a critical reflection on where we stand today, but also on where we’re going, where we need to go, and how…

Floating nuclear power plants in the Arctic? Apparently, Russia is building them. And, luckily, there is nothing to worry about. “We can absolutely guarantee the safety of our units one hundred percent, all risks are absolutely ruled out,” a Russian spokesman…

It was just a few hours ago when I wrote that I thought I’d be delving into the topic of nuclear energya little more soon. Well, soon is now. This post is about two nuclear reactors that are an urgent matter…

For ages, people have been saying: “Solar is a great, clean, renewable energy source, but it is just too expensive. Other energy sources, like nuclear, may have some (or serious) environmental risks, but they are cheaper.” Now, a new report…

Here is this week’s “greencast” or screencast of great green news from around the internet (that we didn’t already cover). Enjoy the video above via YouTube or in high definition on screenr. By the way, if you happen to notice the…