Here are 3 great global warming cartoons, each with their own specific focus. In my humble opinion, these are some of the most important issues facing humanity this century, and probably all time. 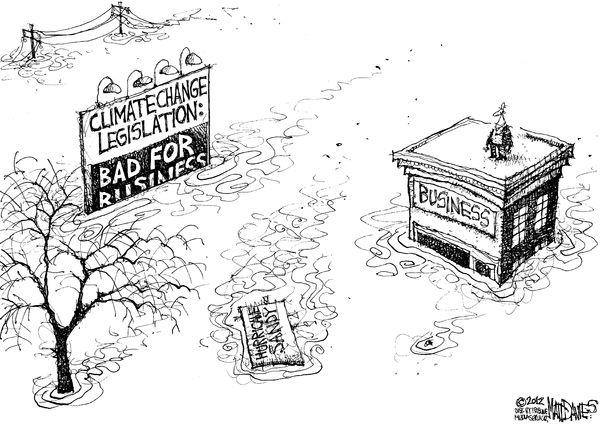 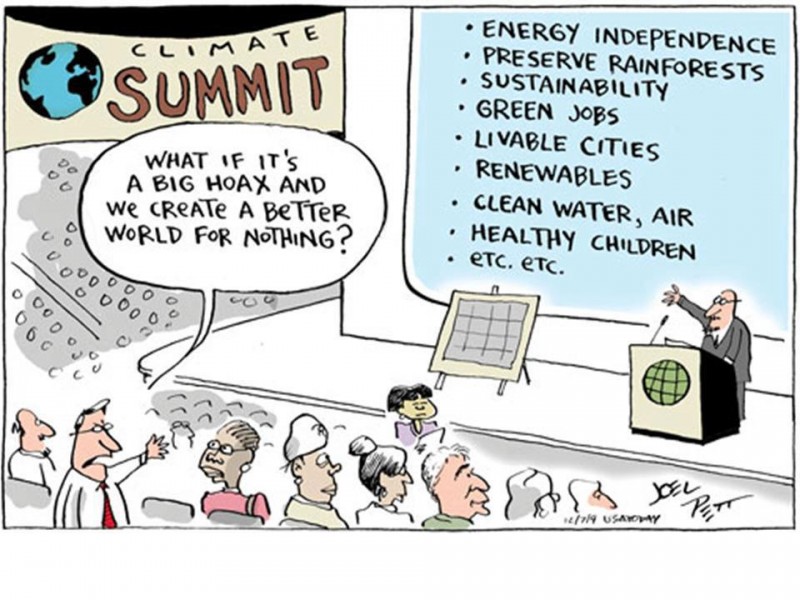 2. This one tackles the business and economy issue from the other side (as well as a few other issues). The ironic thing about opposition to global warming action is that global warming solutions would actually help many things — it would create jobs, improve the economy, improve our health and quality of life… why the heck does anyone have a problem with it? (Note: if your income is based on the short-term success of the fossil fuel industry and the ruin of society, ignore that question.)

3. This is the most concerning one. I’m sure you’re familiar with the old story that a frog sitting in water that is slowly brought to a boil will not jump out and will simply die. (Note: it’s actually frogs with their brains removed that act in such a way.) You might have also heard the metaphor that we are like such frogs. That seems to be, sadly, very true. Global warming and the resulting problems which could tear society to pieces doesn’t happen overnight — it happens slowly, in phases. Record warm here, by less than 1 degree. Record fires there. Record Arctic melt. Record hurricane. Record drought. Each thing is a big problem, but it;s not societal collapse. However, eventually, it could very likely add up to that. The question is, how long will we go ignoring the fact that the pot we are in is heating up? And how wil we wait so long that the warming will take a life of its own (due to reinforcing feedbacks loops) and will be out of our control?

The path we need to take is completely clear. However, fossil fuel industries are rich, money has a lot of influence in politics and policy, money has a lot of influence in media (and can thus sow confusion and misunderstanding the the minds of the public), and those at the head of fossil fuel industries would rather ignore (or stay in denial about) this whole story rather than bite the bullet and do their part to save society.

Of course, you can still do your part to slowly move the tide — go solar, drop the car (or, at least, the gasoline-powered car), vote for and campaign for candidates interested in saving our butts, & spread important news and commentary. 😀